Drop Down Lists In Cells In Excel

Frequently, I need to produce Excel Worksheets that have drop-down lists inside cells. If you ever need to do the same and can’t remember how – this is for you. The screenshots are taken from Excel 2007 but I have included references for Excel 2003 as well.

Personally, I always prefer to put the data that builds my drop-down lists on a separate worksheet. So create a new worksheet and rename it to Lists or something and open that worksheet. Now, lets say for argument you wanted three drop-down lists as follows:

On your Lists worksheet put these lists into three columns and give them headings as shown below:

Select the cells that this range refers to (in this case =Lists!$A$2:$A$6) and click OK. Repeat the exercise creating a named range for Categories and Severities.

Now click back to you Main worksheet which for sake of arguement looks like the worksheet shown below: 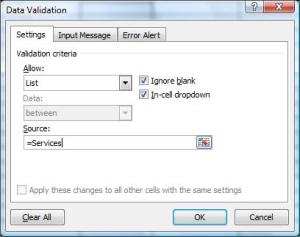 Select List from the Allow drop-down list and in the Source text box enter “=Services” as shown above. Repeat the exercise for the other cells on the Main worksheet (in my case D2 “=Categories” and F2 “=Severities”) and your good to go. All you now need to do is copy row 2 to the lower rows.

Hope this helps. As always, feedback is always welcome (both positive and negative).

One thought on “Drop Down Lists In Cells In Excel”